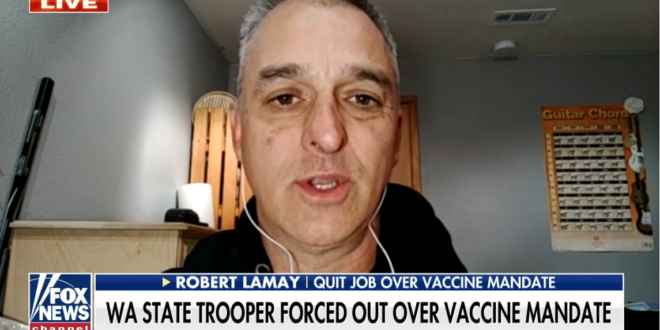 From an October 2021 report by Fox News:

A Washington State trooper, who was forced to step down after refusing to get the COVID-19 vaccine, explained why he told Democrat Governor Jay Inslee to “kiss my ass” after serving the public for 22 years.

He was facing a potential relocation, a new job, and even a pay cut. “The outcry from the public has been amazing,” said LaMay. “I have been reached out to and loved on by the citizens of the United States of America, it’s incredible.”

Below is the seemingly inevitable update.

“This is the last time you’ll hear me in a patrol car and Jay Inslee can kiss my ass.”

Washington State Trooper in Yakima, Wash. signs off after 22 years — fired by @GovInslee for being unvaccinated. pic.twitter.com/RGLDs5BZxg