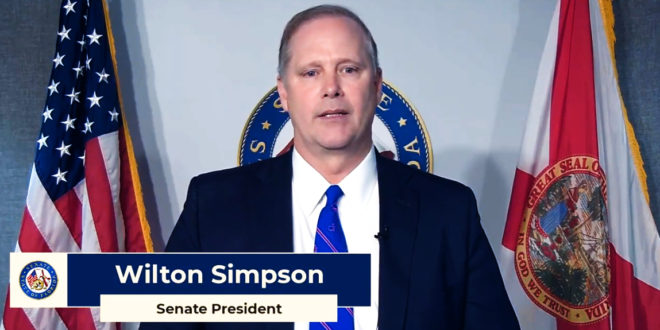 Senate President Wilton Simpson says he would support removing laws requiring a concealed-weapons permit to carry a gun if it comes to a vote.

Simpson’s made the comment to reporters Wednesday after conservatives at the Republican Liberty Caucus said they met with the Senate President. The group has been among a cohort of pro-gun rights organizations pushing for “constitutional carry.”

A bill filed in the House (HB 103), and carried by Howey-in-the-Hill Republican Rep. Anthony Sabatini, would allow law-abiding citizens to practice open and concealed carry by removing laws that require a concealed-weapons permit in Florida.

As I’ve reported previously, Sabatini is the cultiest of Florida Republicans and has been seen with the Proud Boys. He’s currently running for the US House.

Party of terror. The Proud Boys are the paramilitary wing of the GOP pic.twitter.com/h0TSQ2s3eC

In the past week, Gov. Ron DeSantis has committed to signing Constitutional Carry AND will be issuing an emergency order to bar licenses for facilities housing illegals.

We need so much more of this!

If Floridians do not pay attention, Florida will soon get more dangerous. LET ME BE CLEAR, THERE IS NOT SUCH THING AS CONSTITUTIONAL CARRY. That is a marketing term to avoid saying what it is which is permitless open carry.https://t.co/bHF7fI3jy4

Previous Anti-Vax Rep. Thomas Massie Is Sick With Something
Next Cawthorn Cleans Gun During Hearing On Dead Soldiers