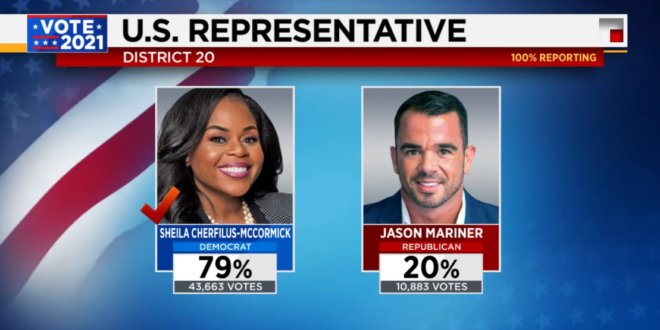 It was not expected to be a competitive contest — Democrats heavily outnumber Republicans in this South Florida district — and it wasn’t. President Joe Biden won Florida’s 20th with 77 percent support, and Sheila Cherfilus-McCormick won the special election with 79 percent support.

But as the CBS affiliate in Miami reported, the unusual part of this story was the response to the outcome from the representative-elect’s Republican rival, who hedged on conceding the race.

“Now they called the race, I did not win, so they say, but that does not mean that they lost either, it does not mean that we lost,” said Republican Jason Mariner. Several hours before the polls even closed, Mariner filed a lawsuit alleging there is a problem with the ballots in Palm Beach and Broward Counties.

As I previously reported, Mariner is a felon who was allowed to run despite never completing the required steps to regain his right to be a candidate.

#BREAKING: Republican candidate Jason Mariner tells @CBSMiami he will not concede the race for Congress in District 20 to Sheila Cherfilus McCormick. He’s down 78% to 19%, but alleges irregularities in this heavily Democrat district. pic.twitter.com/iBFI0GDq0h

Jason Mariner who got his ass kicked by @Sheila4Congress in the #FL20 election is refusing to concede and is filing a lawsuit claiming there was election fraud. This is the Republican party now, a bunch of embarrassing sore losers who have no respect for the democratic process. pic.twitter.com/aW1xEkz939