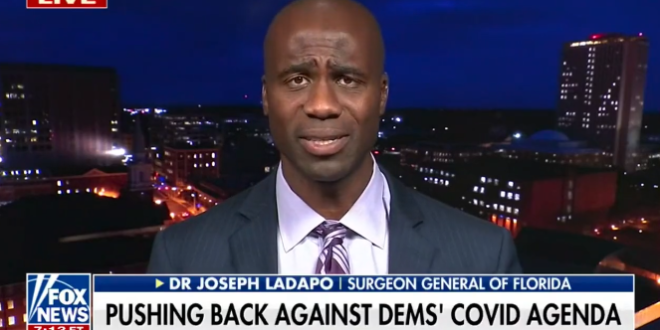 “The vaccine passports, you know, this requirement to get tested to go to school or to get on a plane. I mean, it’s just ridiculous.

“So, there’s a mismatch between the policies and reality. And, you know, more people need to wake up to that, I think, and stop participating in this really dystopian view of public health.” – Joseph Ladapo, last night on Fox News.

“… running on this treadmill of test after test and restriction and vaccine passport and boosters and the 2nd booster and a 3rd booster. That’s someone’s dystopian vision.” pic.twitter.com/oBjHhhOf2Q

I asked Florida’s Surgeon General Ladapo, M.D. if he was going to wear a mask ***in the hospital.***

He refused to answer any questions but masked up.

But a minute later he took off his mask to take a selfie with a fan.pic.twitter.com/YpVgjT5w36