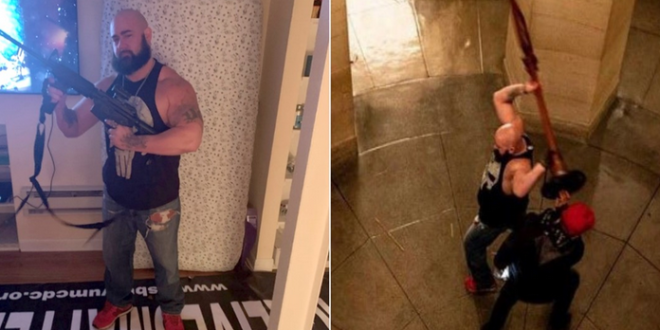 Court papers show Pruitt flashing an “OK” hand sign, which was appropriated by white supremacists as a symbol for “white power.” Pruitt posed in another photograph with an assault-style rifle, standing on a Black Lives Matter banner, with his shoes over the message, prosecutors note.

“I’m sorry,” Pruitt began, audibly crying as he spoke. “I went through hell over the last year.” Pruitt described being fired from one job, and said that on at least one occasion he couldn’t make it back home due to a snow storm.

Read the full article. Prosecutors noted that many of his alleged curfew violations involved being out at at night “in proximity to bars and nightclubs.”

New: A judge has ordered another Jan. 6 defendant to jail for violating pretrial release conditions — Joshua Pruitt violated curfew on multiple occasions, and the govt also noted threatening comments he’d made via social media, probation violations in other non-Jan. 6 cases

NEW: The DOJ says Proud Boy Joshua Pruitt has repeatedly violated his release. They’ve received multiple reports of him threatening people, including an ex, who said he sent videos of himself playing with a knife & outside her apartment. https://t.co/9J2fihdKqq #CapitolRiot