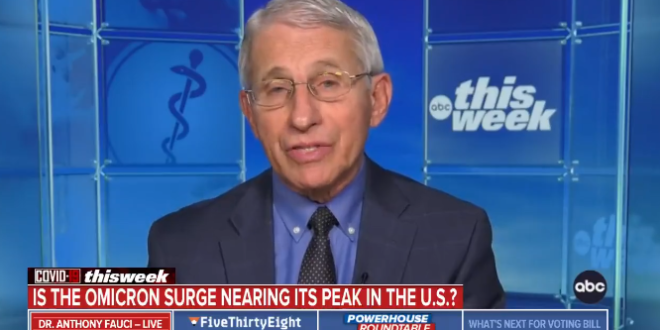 “You never want to be overconfident when you’re dealing with this virus,” Fauci said during an appearance on ABC’s “This Week.” “But if you look at the patterns that we’ve seen in South Africa in the U.K. and Israel … they’ve peaked and starting to come down rather sharply.”

Fauci said there are some states, particularly in the south and west that have seen an increase in omicron infections despite falling infection rates in other areas of the country where vaccination levels are higher.

“But if the pattern follows the trend that we are seeing in other places, such as the northeast, I believe that you will start to see a turn around throughout the entire country,” he predicted.

Dr. Anthony Fauci tells @MarthaRaddatz that he is “as confident as you can be” about the prospect of most states reaching a peak of omicron cases by mid-February. https://t.co/6c3zbGHpIY pic.twitter.com/2ljmRj8cUJ

Previous Ernst: Red States Have “Far More Liberal” Voting Laws
Next Michael Cohen: Trump Told Me That If Any Of His Kids Have To Go To Jail, “Make Sure” It’s Junior [VIDEO]