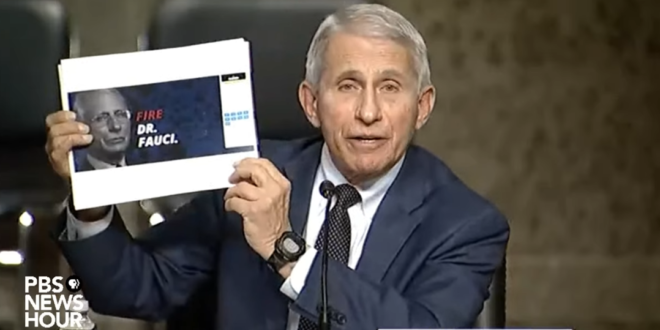 Fauci Blasts Sen. Rand Paul: You Are Inciting Death Threats Against Me For Your Own Political Gain [VIDEO]

Senator Rand Paul (R-KY) went after Dr. Anthony Fauci during a Senate hearing on Tuesday, in which Paul accused Fauci of “using his salary to attack scientists” who disagree with him. The two continued to battle back and forth with Fauci eventually accusing Paul of a continued campaign of personal attacks against him as a tool for fundraising. Fauci pointed out that the “Fire Dr. Fauci” box on Paul’s website leads to a page that solicits campaign donations.

Dr. Fauci, in another contentious exchange with Sen. Rand Paul, says Paul’s attacks against him “kindles the crazies out there, and I have threats upon my life, harassment of my family and my children.”

“You are making a catastrophic epidemic for your political gain.” pic.twitter.com/kdcjne1Gyf

“In usual fashion, senator, you are distorting everything about me … you keep distorting the truth. It’s stunning” — Dr. Fauci and Rand Paul are going at it again.

(Paul is grilling him about his emails.) pic.twitter.com/Q26KrTICHt

Fauci: Why would a Senator want to do this? Go to Rand Paul’s website and you see fire Dr. Fauci with a little box that says contribute here. So you are making catastrophic epidemic for your political gain pic.twitter.com/8dvxZ5ELxp