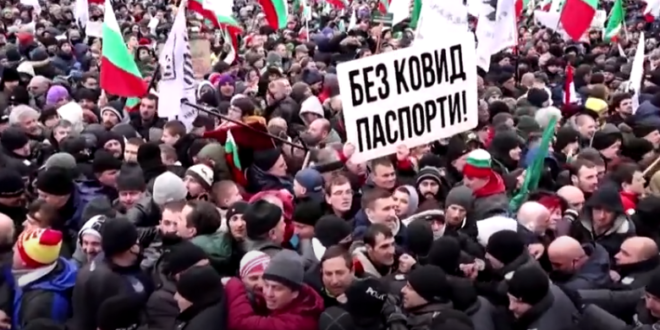 Anti-vaccine protesters tried to storm the Bulgarian parliament on Wednesday and scuffled with police officers during a massive rally against coronavirus restrictions in downtown Sofia.

Tensions rose an hour after about 3,000 people gathered in front of the parliament building, demanding the lifting of a mandatory health pass which they said trampled on their rights and was a back-door means of forcing people to get vaccinated.

Waving national flags and flags of the ultra-nationalist Revival party, which organised the rally, they chanted “Freedom” and “Mafia” and decried all measures against the virus.

Read the full article. Bulgaria has a population of 7 million and is roughly the size of Tennessee.

Only one-third of Bulgaria’s population is vaccinated, making it the least vaccinated country in the European Union. https://t.co/eDdk0WbGAi