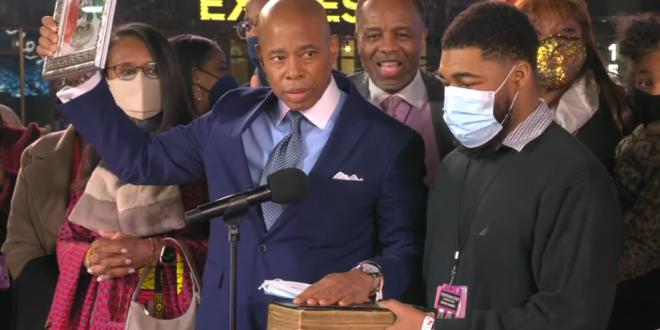 Eric Leroy Adams was sworn in as the 110th mayor of New York City early Saturday in a festive but pared-down Times Square ceremony, a signal of the formidable task before him as he begins his term while coronavirus cases are surging anew.

Mr. Adams, 61, the son of a house cleaner who was a New York City police captain before entering politics, has called himself “the future of the Democratic Party,” and pledged to address longstanding inequities as the city’s “first blue-collar mayor,” while simultaneously embracing the business community.

Yet not since 2002, when Michael R. Bloomberg took office shortly after the Sept. 11 attacks, has an incoming mayor confronted such daunting challenges in New York City. Even before the latest Omicron-fueled surge, the city’s economy was still struggling to recover, with the city’s 9.4 percent unemployment rate more than double the national average.

Eric Adams was sworn in as New York City’s 110th mayor. He faces difficult decisions over how to handle the next wave of the pandemic.https://t.co/st04Dlogq5