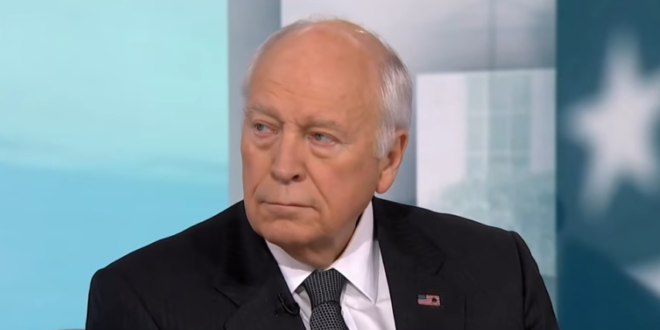 Former Vice President Dick Cheney accompanied his daughter Rep. Liz Cheney (R-Wyo.) to the Capitol for events marking anniversary of the Jan. 6 attack on the Capitol, and expressed disappointment with GOP leadership.

“It’s not a leadership that resembles any of the folks I knew when I was here for 10 years,” Dick Cheney told reporters after exiting the House floor following a moment of silence in recognition of Jan. 6.

“I’m deeply disappointed we don’t have better leadership in the Republican party to restore the Constitution,” he told ABC News earlier Thursday.

NBC News: During the moment of silence on the House floor — to remember the officers who lost their lives — former Vice President Dick Cheney was on the floor with his daughter, Rep. Liz Cheney.

They were the only two Republicans in the House chamber. @NBCNews

Sorry, no, no no, Dick Cheney is the worst of the worst, and is responsible for more deaths abroad than Trump is at home.

Also, Dick Cheney backed Trump for president in 2016 and for re-election in 2020:https://t.co/ju2u6OHHZj https://t.co/eTMOVPCmeA

Former VP Dick Cheney had strong words for how current GOP leaders have responded to the Capitol attack that took place one year ago:

“It’s not leadership that resembles any of the folks I knew when I was here for 10 years.” pic.twitter.com/usUaSzK0gM

Liz and Dick Cheney walking over from House to Senate side pic.twitter.com/VKsdIglydM

“I think a party who is enthralled to a cult personality is a party that is dangerous for the country and I think we clearly have got to get to a place where we are focused on substance and on issues.” pic.twitter.com/WG1fBl8wIb

Dick Cheney is a war criminal who shot a man in the face, and he still has more honor & integrity than 98% of the Republican Party.

He’s also not a traitor.

Previous Homocon Rioter Sells $100 Tickets To Drink With Him
Next Matt Gaetz: When The GOP Takes Over MTG Will Be In Charge Of Proving Antifa And The FBI Were Behind Riot