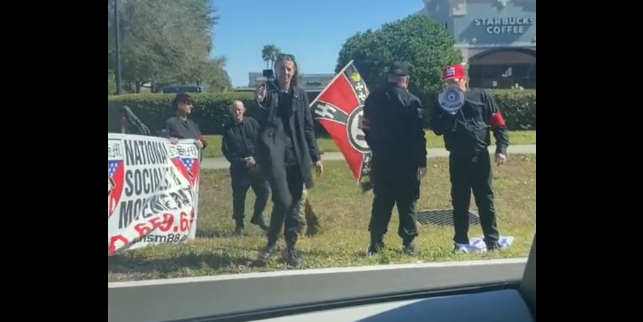 After a group wearing Nazi symbols was seen demonstrating — and yelling antisemitic slurs — in the Orlando area over the weekend, local and statewide officials issued statements condemning their actions as hateful and disturbing. However, Florida Gov. Ron DeSantis did not immediately add to the bipartisan denunciations — and his top spokesperson sparked controversy by questioning whether the swastika-clad demonstrators were actually Nazis.

“Do we even know they’re Nazis?” Christina Pushaw posted in a since-deleted tweet, according to FloridaPolitics.com. “I trust Florida law enforcement to investigate and am awaiting their conclusions.” Despite having deleted her tweet, Pushaw has since retweeted several posts defending her skepticism of the Orlando demonstrations and criticizing those asking for the governor to weigh in on them, while also adding “we have always condemned antisemitism and hate.”

Read the full article. The Nazi group is based in Kissimmee, which about 30 miles south of Orlando near Disney World. They are well known to the SPLC and Jewish organizations.

I am aware of the anti-Semitic demonstration in Orange County. I along with the Orange County Sheriff’s Office deplore any type of hate speech. This hatred has no place in our society. Any reports of criminal activity will be thoroughly investigated.

Yesterday neo-nazis rallied in Orlando. But America beat their disturbing ideology before and we’ll do it again. As a police commander I saw similar rallies, and I also saw that for every nazi there were a hundred Floridians there to stand up for what’s right.

The hateful & anti-Semitic demonstrations reported in Florida today have no place in our state. Across America, we’ve seen a heartbreaking & disgusting rise in hate like this. We must always condemn it & continue to stand strongly with our Jewish communities.

Ron DeSantis press secretary @ChristinaPushaw liked this tweet from someone saying “why does anyone need to condemn nazis for you” and saying that nazi rallies in orlando is “faux outrage”. I ask again, why is it so hard for Ron DeSantis and his staff to simply condemn nazis??? pic.twitter.com/kezYZqqLoS

So – If the governor himself does not issue a public statement of specific condemnation of whoever this group is, within a time period that the Left deems acceptable, he is smeared as a Nazi sympathizer by default?

And it’s not a strawman, read @politicalelle thread.

Democrat politicians have falsely insinuated all weekend that the Governor’s policies are somehow responsible for the protest with Nazi symbols. The same Dem politicians insist falsely that hate groups are the Governor’s base. It’s just so wrong, sick, and exhausting sometimes. https://t.co/iVRPYqP5H3

Her response after she failed to do research on the group that was protesting to see that they are, in fact, Nazis. She also failed to realize her words have deep consequences and that her initial reaction couldn’t have been worse. https://t.co/r5FhbCJ7dR

This weekend in Orlando, Nazis chanted “The Jew is the devil” and “Jews rape children and drink their blood.” Their signs read “VAX THE JEWS” and “Let’s go Brandon.” They gave Nazi salutes.

This is not a drill, folks. It’s happening here. pic.twitter.com/RBog1Uu8yI

More closeups of the Florida Nazis seen in Orlando. Really disgusting to see this but this is what the constant misinformation, conspiracy theories, and hateful rhetoric that is prevalent in right wing Florida politics leads to.pic.twitter.com/fxA2yJ0UgE

My son just witnessed nazis in Orlando. He said there were dozens hanging on the corner. The guy getting assaulted got out of his car and pushed one of them. @fox35orlando pic.twitter.com/HUvNgI3zwl

More video of the Florida Nazis at Waterford Lakes near UCF in Orlando #BecauseFlorida pic.twitter.com/Ucu8MtXIqK

A friend just sent me this photo of Nazis marching again today in #Orlando. This time on an I-4 Overpass. Note the “Let’s go ‘Branon’” banner, as well. #florida #becauseflorida #flapol pic.twitter.com/BBu9mRGn0q