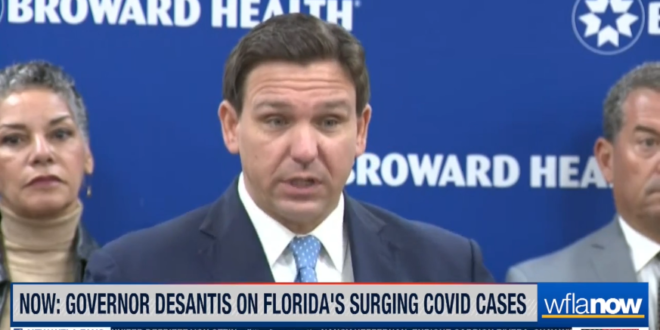 Florida Gov. Ron DeSantis (R) blamed the Biden administration for COVID-19 woes in his state while accusing other state leaders of allowing “hysteria” to reign as they encourage mitigation measures against the virus that he claimed had little basis in sound science.

“In terms of Florida, you look what’s going on in other states, they’re letting hysteria drive them to doing really damaging things. We thought that people had learned,” DeSantis said during his first news conference in weeks on Monday after record-setting COVID-19 numbers spread across the state last month.

DeSantis, who has routinely promoted monoclonal antibodies since former President Donald Trump credited the treatment for his recovery, said his administration was worried about dwindling supplies, even as several of the approved treatments appear to be less effective in fighting off Omicron.

DeSantis called on the federal government to let states to directly purchase monoclonal antibody treatments at a news conference in Fort Lauderdale. DeSantis said while it may not be as effective against omicron compared to its use against the delta variant, Florida still wanted to have the treatment available for those in need.

Instead of keeping a stranglehold on monoclonal antibodies, the federal government must release its stockpiles to states who want them and allow states to purchase these medications directly. pic.twitter.com/TVPUFxMLUT

Almost nothing @GovRonDeSantis does makes sense, unless you realize he’s doing it for Iowa caucus-goers.

We went to DeSantis’ press conference to ask why during Florida’s worst COVID surge, he won’t reopen state-operated testing sites he closed in May. We were denied entrance despite having RSVP’d but we saw his conspiracy theorist surgeon general and asked him. He refused to answer pic.twitter.com/oGfj2qyL0L

Ron DeSantis starts his first press conference since December 17, 2021 by blaming his absence last week on Biden and federal government for not providing antibody treatments