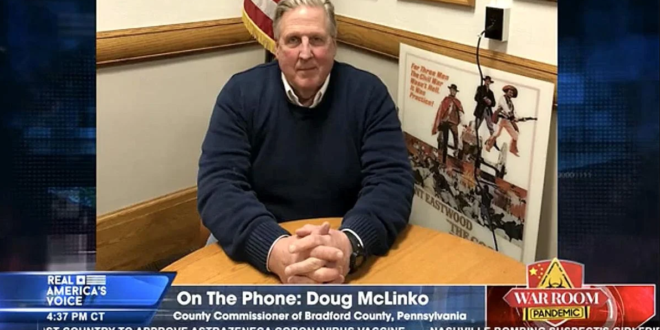 An appellate court has ruled that Pennsylvania’s mail voting law is unconstitutional, but the decision is not likely to have an immediate impact as the Wolf administration plans to appeal to the state’s highest court.

The ruling by Commonwealth Court comes in response to suits filed by Bradford County Commissioner Doug McLinko and a group of Republican state representatives — many of whom voted for Act 77, the 2019 law that expanded no-excuse mail voting in Pennsylvania.

In a statement Friday shortly after the ruling became public, Trump put out a statement praising the decision: “Big news out of Pennsylvania, great patriotic spirit is developing at a level that nobody thought possible. Make America Great Again!”

Read the full article. Bolding above is mine. As you can see in this post’s photo, McLinko has appeared on Steve Bannon’s show.

The Republican-leaning Commonwealth Court agreed with a group of Republicans that the bill they drafted and voted for violated the constitution.

“…the decision is almost certain to be appealed and decided by the state’s highest court.”https://t.co/fbIBsXHr3u