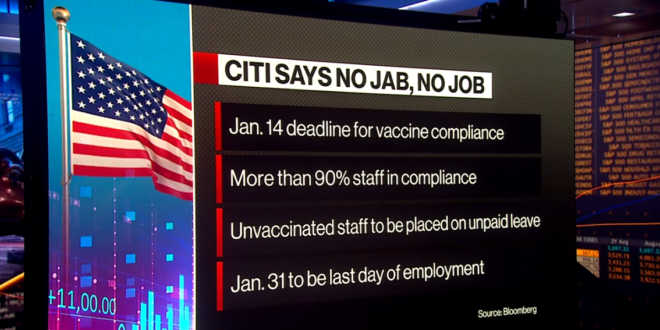 Citigroup To Be First Wall Street Bank To Fire Unvaxxed

Citigroup Inc staff in the United States who have not been vaccinated against COVID-19 by Jan. 14 will be placed on unpaid leave and fired at the end of the month unless they are granted an exemption, according to a company memo seen by Reuters on Friday.

The U.S. bank announced its plan to impose new vaccination rules in October and now becomes the first major Wall Street institution to follow through with a strict vaccine mandate.

Other major Wall Street banks, including Goldman Sachs, Morgan Stanley, and JPMorgan Chase, have told some unvaccinated employees to work from home, but none has yet gone as far as sacking staff.

Read the full article. A quick search on Twitter reveals right wingers vowing to sell their stock in “tyrannical” Citigroup.

Previous GOP Sen. John Thune To Seek Reelection After All
Next CHATTER AWAY: Overnight Open Thread