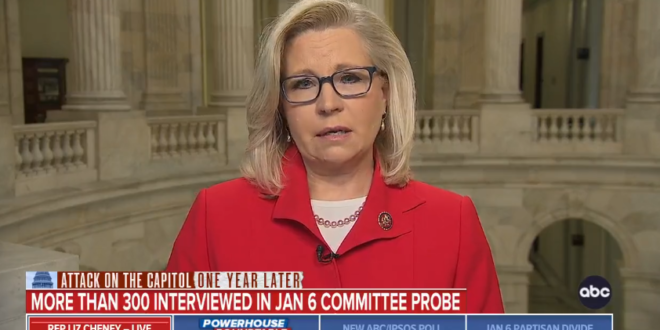 Liz Cheney: Trump Is “At War With The Rule Of Law”

“I think that that we’re in a situation where people have got to understand the danger of President Trump and the danger that he posed on that day,” Cheney said of the Capitol riots on Jan. 6 while appearing on CBS’s “Face the Nation.”

Trump is planning on holding a press conference on Jan. 6 at his Mar-a-Lago resort. When announcing the event, Trump repeated his claims that the election was stolen and said he would be going over these assertions during his conference.

“The president could have at any moment, walked those very few steps into the briefing room, gone on live television, and told his supporters who were assaulting the Capitol to stop,” Rep. Liz Cheney says of former Pres. Trump’s actions on Jan. 6. https://t.co/zo7wSq6hc1 pic.twitter.com/sUYg0wGKsi

Liz Cheney: The committee has firsthand testimony now that Trump was sitting in the dining room watching the attack on television pic.twitter.com/L2AgEaC9xl

“When a president refuses to tell the mob to stop, when he refuses to defend any of the coordinate branches of government, he cannot be trusted.” https://t.co/XgWWqheWM4 pic.twitter.com/0jDiPTFVxS

Rep. Liz Cheney, the top Republican on the House select committee investigating the Jan. 6 assault on the U.S. Capitol, says former Pres. Trump is “clearly unfit for future office, clearly can never be anywhere near the Oval Office ever again.” https://t.co/RiggrVxhOk pic.twitter.com/afEjpBW3sn

Liz Cheney: We have firsthand testimony that his daughter Ivanka went in at least twice to ask him to please stop this violence pic.twitter.com/EqdSKvvmRm

“The Republican Party has to make a choice. We can either be loyal to our Constitution or loyal to Donald Trump, but we cannot be both,” GOP Rep. Liz Cheney tells @GStephanopoulos. https://t.co/RhbkmuCrEO pic.twitter.com/B9OLaDxdY2