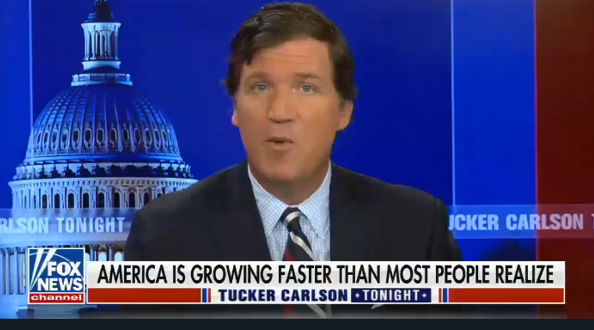 Carlson: The US Has Too Many People For Democracy

Our population is too big. Why should your opinion matter? You’re one of many. Previous generations of Americans didn’t live in a country like this and they would be stunned by the attitudes that are so common now — attitudes we take for granted.

“Arresting people for walking through the US Capitol building? How is that a crime?” nineteenth century Americans would wonder.

For most of our history, Americans believed they owned the Capitol. They thought it was theirs because they assumed this was their country, political leaders told them that it was.

After the 1904 presidential election, Teddy Roosevelt greeted voters in person on the lawn of the White House. It was his home, he lived there, but it belonged to them.

Attitudes like that are long gone. They’re the victim of population growth. The Athenians invented democratic government, but at its peak, Athens only had about 8,000 voters. So, past a certain scale, democracy can’t function very well. The concept of the citizen becomes too abstract.

Previous Pope Francis: Having Pets Instead Of Babies Is “Selfish”
Next Chicago Schools Close After Teachers Refuse To Work