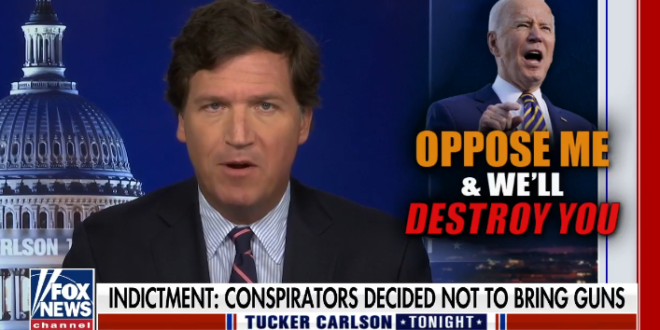 TUCKER CARLSON (HOST): Is Thomas Caldwell a seditionist? Is he an enemy of this nation? On January 6th, was Thomas Caldwell trying to overthrow the U.S. Government by force? That’s a pretty hard case to make.

Caldwell’s indictment paints him as a dangerous militia leader who was planning a sort of D-Day invasion on the banks of the Potomac.  The real Thomas Caldwell does not fit that description. Caldwell’s a senior citizen who walks with a cane, he’s a devout Christian.

Try to picture Thomas Caldwell leading a bloodthirsty band of insurgents — you can’t, because he didn’t. The Justice Department claims that Caldwell sought to overthrow the American system, but that is hard to believe.

Caldwell in fact spent most of his life in honorable government service including 20 years as a naval officer. He retired with 100 percent physical disability. In fact, if anyone seems like a thoroughly loyal American it’s Thomas Caldwell. There’s no question he likes this country much more than Susan Rice does, or Tony Blinken.

Thomas Caldwell (65)the Oath Keeper known as “Commander Tom,” who tried to buy a double-barreled .380-caliber handgun disguised as a cell phone two months before insurrection has been arrested today for seditious conspiracy. pic.twitter.com/DRABicFYJH

Oath Keeper Thomas Caldwell, who has been arrested for seditious conspiracy against the United States. Oh, the irony. pic.twitter.com/plBR5enAdd

Previous Fox Host: Satanism In Schools Is Worse Than COVID
Next Experts: Next Variant May Be Worse Than Omicron