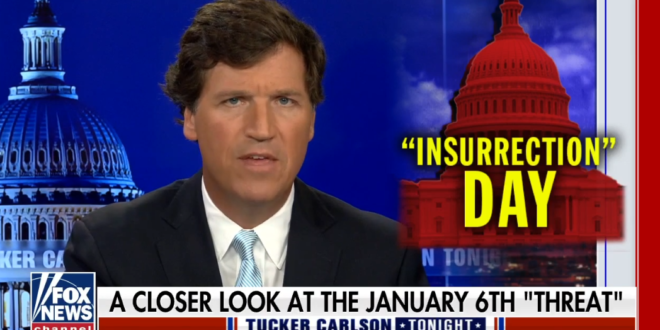 Carlson: “Not A Lot Really Happened” On January 6th

“As you may have heard, this is the anniversary of Jan 6. And in commemoration of that, we have donned the official network approved solemn anchor outfit: white shirt, navy tie. Message: reverence.

“But if you take three steps back as historical events go, if we are being honest now, Jan. 6 barely rates as a footnote. Really not a lot happened that day if you think about it.

“The presidential election was not overturned, the Capitol was not destroyed, the government was not toppled, no matter what you may have heard.

“None of the so-called insurrectionist had guns [FALSE]. When was the last time you saw an insurrection like that?

“Looking back, you probably would call what happened on Jan. 6 a riot. We have called it that. But really only just a riot. Maybe just barely.

“So the question is why are we still talking about this?” – Tucker Carlson, in the opening of last night’s show.