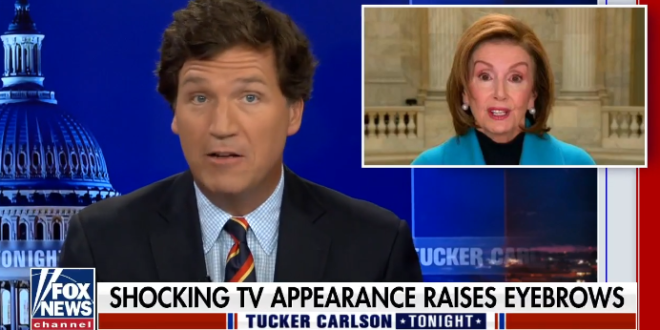 “So yesterday was Sunday, and you may have found yourself on the couch idly flipping around the TV dial. And if you flipped far enough, you could’ve had the shock of your life. Michael Jackson was on Face the Nation.

“Now let’s be clear: this wasn’t a video of Michael Jackson performing his hit songs of the 1990s. This appeared to be a living version of the international pop star that news reports claimed died of a drug O.D. more than a dozen years ago.

“And yet despite those claims there he was, fully, undeniably Michael Jackson talking on television. How can that be? Honestly, we have no idea.

“We’re not theologians here. This is merely a news program. We can only show you what we saw. Here it is.” – Tucker Carlson, last night.

In search of a new low on a nightly basis, Tucker Carlson says that Nancy Pelosi looks like Michael Jackson. pic.twitter.com/asyPHlm09g