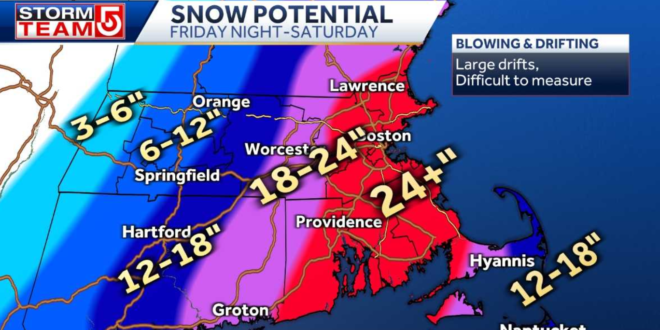 Winter Storm Kenan will develop into a powerful nor’easter over the western Atlantic beginning late Friday, bringing heavy snow, strong winds and coastal flooding to parts of the East Coast. Winter storm watches have been issued by the National Weather Service for Friday night and Saturday from parts of southern New England southward through the coastal mid-Atlantic as far south as eastern North Carolina.

It’s likely Winter Storm Kenan will become a “bomb cyclone” – a term meteorologists use for a low-pressure system associated with fronts with a central pressure that plunges at least 24 millibars in 24 hours or less. A storm with a lower pressure is stronger. The strongest winds in this storm will likely impact southeastern New England, where gusts as high as 60 mph are possible.

New York Governor Kathy Hochul is urging all New Yorkers to prepare for snow and heavy wind as a nor’easter approaches. The storm is expected to hit Friday evening and last through Saturday night for Long Island, New York City, and the Mid-Hudson regions.

The New York State Division of Homeland Security and Emergency Services’ Emergency Operations Center is activated and will closely monitor conditions, coordinate response operations, and remain in contact with localities throughout the duration of the event.

Boston will be in the heart of the storm, which is expected to unload 18-36 inches in the city. It is not out of the question for the blizzard to climb into the top-five biggest snowstorms to impact Boston, and it could be the biggest to hit Beantown in January.

Other locations that will see a similar dumping of snow, with an AccuWeather Local StormMax™ of 36 inches, are Providence, Rhode Island, to Portsmouth, New Hampshire, and Portland, Maine.

Previous Marvel Star Boasts She Attended DC Anti-Vax Rally
Next NYC Warns: Get Tested If You Come Near Typhoid Palin