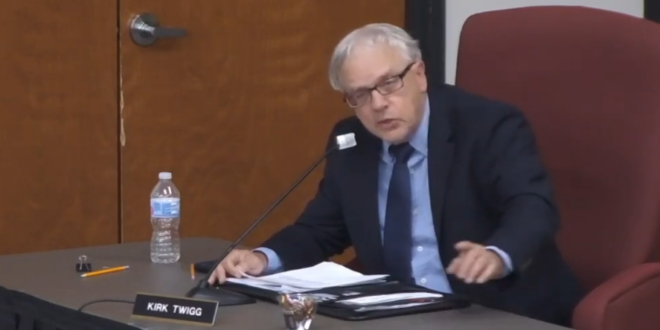 The Spotsylvania County School Board wasted no time Monday making its mark in the at-times contentious first meeting of the year, which included fiery jabs at the new chairman and squabbles between members.

It began with a vote to name Livingston district member Kirk Twigg the new chair. Twigg supported banning and even burning some “sexually explicit” books from school libraries in November. His win gives conservatives a majority on the school board.

The move to appoint him drew the ire of the outgoing chair, Dawn Shelley, who delivered a scorching criticism of Twigg. “He has spoken about confidential [human resources] matters in open session. He is constantly using his AOL account to send and read emails throughout school board meetings. He wants to burn books,” Shelley said.

Read the full article. Watch the first clip. It’s really something. As you’ll see, Twigg doesn’t even understand the rules of the board he’s now in charge of. The second clip is from last week when he first called for book burning.