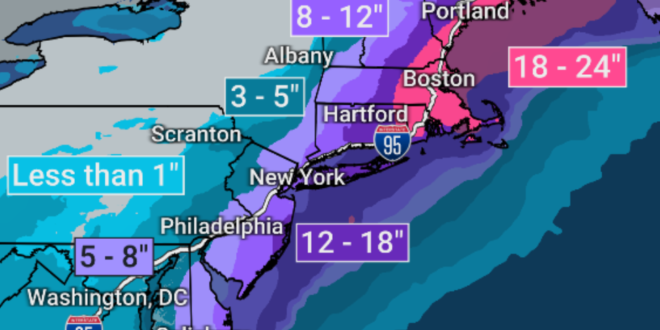 Blizzard Warnings Issued For Most Of Northeast Coast

Blizzard warnings are in effect from coastal Virginia to eastern Maine as a powerful and potentially historic winter storm is set to slam the Mid-Atlantic and Northeast beginning Friday.

The storm will bring an array of hazards, from zero visibility amid hurricane force wind gusts and heavy snow to coastal flooding that will erode vulnerable beaches and threaten coastal property from the Jersey shore to coastal Massachusetts.

The storm is expected to rapidly intensify as it moves from the coastal Carolinas on Friday to a position south-southeast of Cape Cod on Saturday. A total of 46 million people were under some form of winter storm warnings as of Friday morning.

This snow will gradually diminish in Long Island and southern New England Saturday night, but will continue in Maine and parts of New Hampshire. At least moderate to locally heavy snowfall will also fall from the New York City tri-state into the Delmarva Peninsula and Virginia Tidewater before diminishing Saturday afternoon.

Poor visibility from blowing snow is expected where accumulating snow overlaps with the stronger winds along the East Coast. Blizzard conditions are most likely in areas under blizzard warnings.

This bomb cyclone is going to be one for the record books in New England! Insane snowfall rates up there, incredible snow totals, hurricane force winds possible. This will be the Blizzard of 2022! Parts of six different states, including New Jersey are now under Blizzard Warnings pic.twitter.com/B1EpjdAABO

A bomb cyclone is taking aim at the East Coast, putting 75 million people from North Carolina to Maine in its crosshairs. Boston is bracing for 3 feet of snow and winds of up to 60 mph. @chadmyerscnn has the latest forecast. pic.twitter.com/xf0ONq4kdw

Snow Totals UP and Blizzard Warnings in effect. Hurricane Hunters flew into the Atlantic last evening and the new data went right into the models. Here is our latest forecast/alerts. pic.twitter.com/BjCM5RvQX6