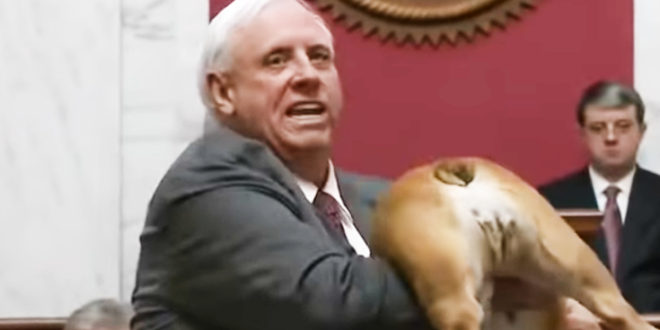 West Virginia Gov. Jim Justice sent a clear message to those who have anything negative to say about the state, including Grammy-winning singer Bette Midler. At his 2022 State of the State address on Thursday, Justice grabbed his famous bulldog Babydog and turned her rear end to the audience saying, “Babydog tells Bette Midler and all those out there, ‘kiss her hiney.’”

Last month, Midler called out Sen. Joe Manchin in a tweet that gave a dig at West Virginia as collateral damage. “What #JoeManchin, who represents a population smaller than Brooklyn, has done to the rest of America, who wants to move forward, not backward, like his state, is horrible. He sold us out. He wants us all to be just like his state, West Virginia. Poor, illiterate and strung out,” she tweeted.

Bette Midler had harsh words for the governor of West Virginia after he showed his dog’s backside at the end of his State of the State speech, in a bizarre rejoinder to the actor, singer and activist. On Friday, Midler retweeted a picture of the stunt with the caption: “Here we can see a dog’s asshole. Right next to it is the butt of Jim Justice’s dog.”

Here we can see a dog’s asshole.

Right next to it is the butt of Jim Justice’s dog. pic.twitter.com/Dt1FuWM60r

BTW, here are the state rankings of all the areas and agencies for which the so-called “Governor” of WVA, #JimJustice, is responsible. Judging from these rankings, I’d say his dog’s ass would make a better Governor than him! pic.twitter.com/TJAB3oj5VV