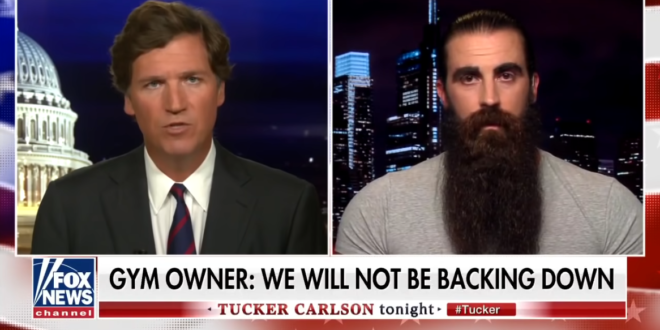 A South Jersey gym owner who gained national prominence for refusing to follow Gov. Phil Murphy’s business closures and mask mandates during early months of the coronavirus pandemic, will announce next week that will run for Congress.

The long-bearded, heavily tattooed owner of Atilis Gym in Bellmawr became the public face of opposition to Murphy’s mandate to close fitness centers in March 2020. Smith’s gym offered free memberships to people who refused to be vaccinated.

Earlier today Smith and his business partner were both sentenced to one year of probation for repeatedly defying New Jersey’s lockdown orders.

Smith has reportedly paid $1.5 million in fines. Most or all of the fines appear to have been covered by crowdfunding appeals.

As I’ve previously reported, Smith has become a folk hero to Fox News, winning praise from Fox hosts after literally kicking down the boarded up doors to his gym after the state shut him down for defying COVID regulations.

In July 2020, Fox & Friends exultantly reported live from Smith’s gym during a protest at which white supremacists waved the flag of the Three Percenters militia.

In 2007, Smith pleaded guilty to vehicular homicide in a drunk driving crash that killed a 19 year-old man. He was sentenced in June 2008 to five years in prison.

NOTE: The New Jersey Globe is owned by David Wildstein, who is 2015 pleaded guilty to two felony counts for his role in then-Gov. Chris Christie’s infamous “Bridgegate” scandal. Wildstein was sentenced to two years probation and is banned for life from working for any government agency.

Thanks to all who joined in on our sentencing hearing. So many came that the server crashed.
⠀
We got one year probation for the crime of taking our doors off to prevent government goons from locking us out of our gym.
⠀@theatilisgym is open and will remain open at any cost.

I heard Trump didn’t mention the [VX] during his AZ rally. Good. The American people are tired of hearing what a great accomplishment it is and quite frankly don’t believe that lie. Stick to America First policies, not Pharma BS.

I don’t know who needs to hear this but that hand sanitizer you keep using is weakening your immune system, messing with your hormones, and definitely is not stopping COOFID.

BREAKING: Atilis Gym owner Ian Smith, who made national news for his opposition to @GovMurphy COVID-19 policies, is running for Congress against @AndyKimNJ in NJ-3. @TheAtilisGym @iansmithfitness. https://t.co/hQnF5mSGIj

Ian Smith, who gained fame during the height of the pandemic, has already paid $1.5 million in fines.

“We got one year probation for the crime of taking our doors off to prevent government goons from locking us out of our gym,” Smith said.https://t.co/zzIOJ2vM0v

Previous Prominent Anti-Vax Loon: The Vaccine Turns You Into “Transhumanist Cyborgs” To Be Controlled By Magnets
Next Belarus: We’ll Go To War If The West Attacks Russia