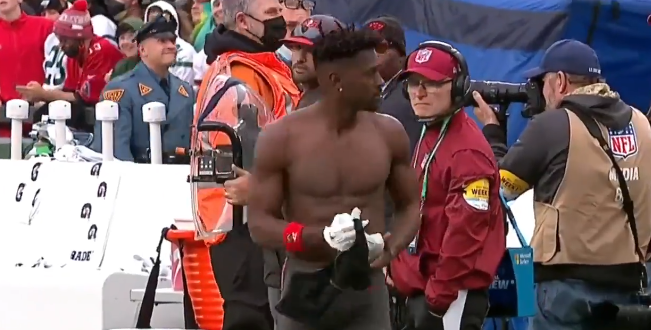 Controversial Tampa Bay Buccaneers receiver Antonio Brown may have exited football on his own terms. During the third quarter of today’s away game against the New York Jets, Brown took off his jersey, ran across the field, then tossed his jersey and other equipment into the stands.

He then trotted into the locker room as his teammates and coaches looked on in astonishment. Last month, he was suspended by the NFL for three games for having a fake vaccination card. In April last year, he settled a lawsuit brought by his former trainer who had accused him of rape and sexual assault.

After a bizarre incident that saw Antonio Brown leave Sunday’s win over the New York Jets mid-game and shirtless, head coach Bruce Arians told reporters that the veteran wide receiver is no longer with the team.

“He is no longer a Buc,” Arians said after the game. “That’s the end of the story. Let’s talk about the guys who went out there and won the game.”

While both teams remained on the field during a break in play, Brown ran to the end zone, where he performed his jumping jacks and gave the crowd a peace sign before exiting to the tunnel. It wasn’t clear immediately after the game what prompted the scene.

Video of Antonio Brown leaving the field after taking off his jersey and shirt and throw it into the stands. pic.twitter.com/1hwNYei5Fq

Mike Tomlin tolerating Antonio Brown for nine seasons is one of the great coaching achievements in NFL history.

Bruce Arians announced Antonio Brown is no longer a member of the Buccaneers pic.twitter.com/tC4IB8P4Te

What the hell is Antonio Brown doing?! pic.twitter.com/gdgSfrk0W4