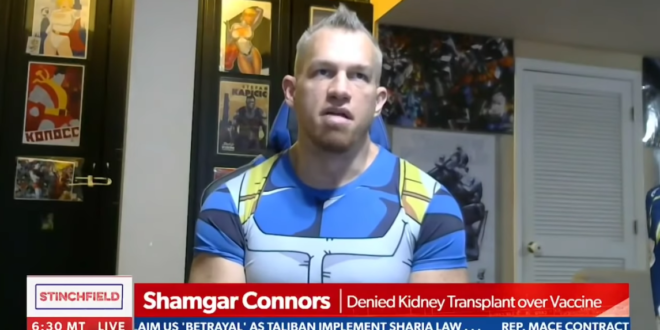 A man seeking a kidney transplant has been denied a place on the active transplant list because he chose not to get vaccinated.

Shamgar Connors, 42, is a patient at University of Virginia Hospital who is now listed as “inactive” on the list for a life-saving kidney transplant. Connors said his entire family had COVID-19 and doesn’t believe he needs the vaccine.

“I’d rather die of kidney failure,” Connors told Dr. Karen Warburton after she asked if he was willing to receive the vaccine, according to Fox News Digital.

Sorry Anti-Vaxxer notes that Connors has been making the rounds of right wing media, including an appearance on the show of far-right extremist Stew Peters, who has called for executing Anthony Fauci and other health officials.

Connors is reportedly on his fourth Facebook account due to bannings for spreading lies about the vaccine.

Check out his GoFundMe page.