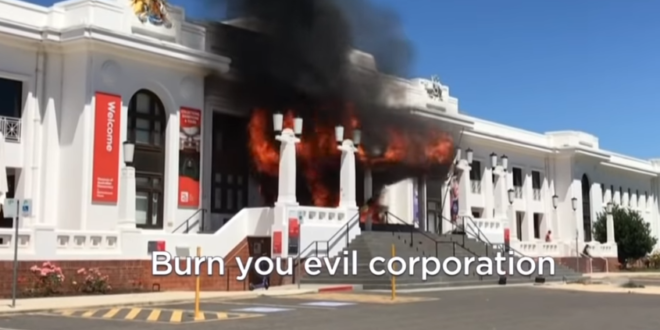 Leaders of a group of protesters who set fire to the facade of Old Parliament House in Canberra are closely linked to a complex network of anti-vaccination and conspiracy groups which have been accused of spreading misinformation in Indigenous communities during the Covid-19 pandemic.

The fire, which broke out during a protest at the entrance to the building on Thursday, caused extensive damage to the doors and portico. Old Parliament House fire protesters linked to anti-vaccine and conspiracy groups. Among the protesters are Indigenous land rights activists, anti-vaccine groups and so-called sovereign citizens.

The latter is a fringe conspiracy group rooted in antisemitism and organised around a haphazard collection of pseudo-legal beliefs broadly grouped around the notion that modern government is an illegitimate corporation.

Read the full article. The Old Parliament House was the seat of government from 1927 – 1988 and now serves as a venue for exhibitions and concerts. The final clip below shows protesters setting the fire and forming a human barrier so its start could not be seen from the street.

These are strategic targets. The protestors’ neofascist puppeteers have an endgame here. #auspol https://t.co/RBuUPYSEsI

FYI protesters in Canberra at Old Parliament house are a ‘sovereign citizen’ group with overlapping members in the ‘freedom’ movement. They’ve been turning up for the past few weeks. They posted this “trespass” notice on the building doors this week pic.twitter.com/ZDBNDNEbpu

More footage of people watching as a fire consumes the front entrance to Old Parliament House in Canberra. Police and other agencies will have lots of footage to work with as they investigate. pic.twitter.com/xwbhlpB5zM

The aftermath of a fire at Old Parliament House in Canberra. 📸 by Gary Ramage @GaryRamagePhoto. pic.twitter.com/sjoFQ4okii