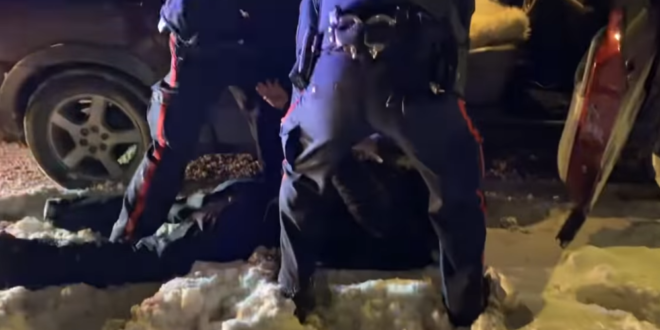 A Calgary-based street pastor and his brother — both known for being pandemic-denying and anti-mask — have been released on bail following their arrest after a protest outside the health minister’s house, their lawyer confirmed Sunday.

Calgary police say there was a protest in northwest Calgary Saturday afternoon, with about 50 people in attendance, and two had been arrested. Defence lawyer Chad Haggerty says the two people arrested were Artur Pawlowski and his brother Dawid Pawlowski.

Haggerty confirmed the two were arrested after gathering outside Health Minister Jason Copping’s home. A video of the protest, posted on an anti-vaccine and anti-mask Facebook account, shows protest attendees in the residential neighbourhood holding signs and chanting while a helicopter can be seen flying overhead.

Video of the arrest, shared on Pawlowski’s YouTube channel, shows police officers arresting the pastor after pulling him over on a busy highway. Pawlowski referred to one of the officers as a “Gestapo Nazi,” echoing his previous criticism of the government’s enforcement of coronavirus worship restrictions.

When sharing a shortened video of the arrest, Ezra Levant of the pro-Pawlowski outlet Rebel News concluded that Calgary Police “could arrest him at his church or home” or “call his lawyer” and “have her bring him in.” Instead, he contends they chose “this showy spectacle, to terrify him and others.”

Artur Pawloski last appeared on JMG when he was first arrested for defying COVID laws. Pawlowski is fond of blaming natural disasters on God’s anger over LGBT civil rights. He first appeared on JMG way back in 2010 when Canada revoked his then-church’s tax-exempt status for violating laws on political activities by churches.

Jason Kenney is the premier of Alberta province.

All Albertans have a right to protest peacefully. That right does not extend to trespassing at private homes and harassing the families of public officials.

Unfortunately, this is not the first time that fringe anti-vaccine conspiracy theorists have tried to intimidate government officials in this manner. I am sure that the vast majority of Albertans reject this kind of extremism.

Previous Graham: Pray For Jesus To Stop The “Voting Rights” Bill
Next Anti-Vax GOP Texas Lt Governor Is Sick With Something