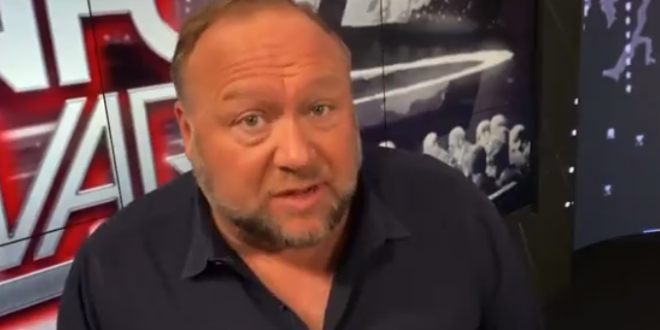 “We’ve asked why Ray Epps hasn’t been arrested. And that’s really what’s happening here. Stewart Rhodes has been indicted for doing absolutely nothing and not calling for a breach in the Capitol to cover up for Ray Epps because Sen. Ted Cruz and others brought it up in Congress as one of the top trending stories on Google, Twitter, Facebook, and Instagram.

“We have hundreds of people still in solitary confinement. We have political prisoners. We have the whose system running on domestic terrorism in 2022 and the left tried to cause a new civil war in their own words. This is crazy. We need peace. We need to come together and we need not have a civil war in America.” – Alex Jones, on today’s show.

Alex Jones today is blaming Ted Cruz for getting Oathkeepers leader Stewart Rhodes arrested yesterday. He said after Ted brought up the Ray Epps conspiracy, DOJ retaliated by arresting Rhodes. He also said that arrests need to stop because we “need peace” and to “come together.” pic.twitter.com/gub97Eknwy

1) I know this will break some hearts. For a few months, people like Tucker Carlson, MTG, Gaetz, and now Cruz have been “just asking questions” about a man named Ray Epps.

2) He was on video the day before Jan 6 saying “we’re going INTO the capitol!” The some in the crowd chanted “fed fed fed.” Why? Who knows, maybe they knew he was videoed talking about breaking into the Capitol the day before it was to happen and wanted to create distance?

3) Regardless, he was put on the FBI wanted list, then removed. Because of all of that, the conspiracy that he was an FBI agent has been gospel on the blogs and shows. -side note- this is why we have to address conspiracies not ignore them.

4) He didn’t enter the Capitol on Jan 6, and was removed from the most wanted list because apparently he broke no laws. I’m pretty sure the FBI wouldn’t be dumb enough to put their own agent on a wanted list. Ray Epps has cooperated with the Jan 6 committee and we thank him

Ray Epps was thanked by the select committee despite having increased criminal acuity on J6. This makes his involvement even more suspicious.

When Republicans take control, we’ll put him under oath in front of America and ask the real questions.https://t.co/nULWP4egrM

Rep. Matt Gaetz says it was RAY EPPS who ‘paved the way’ for protestors to breach the Capitol pic.twitter.com/icd3jKE7zZ

One more @tedcruz conspiracy down. Ray Epps has cooperated and is nothing but a Jan 6 protest attendee, in his own words. Sorry crazies, it ain’t true. pic.twitter.com/UAcRMOCpRw

He screwed up by telling the truth last week

So he’s groveling by spewing lies

Seems like the Tucker interview has had an effect on Ted Cruz. Cruz is now asking about FBI involvement in January 6th and Ray Epps pic.twitter.com/uytChAWoAG