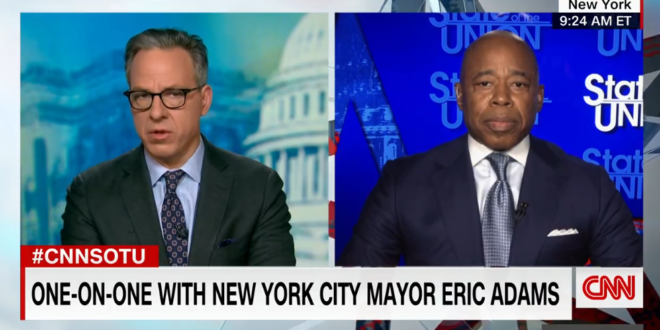 “He will be in charge of my security, which is extremely important to me in a time where we see an increase in white supremacy and hate crimes.

“I have to take my security in a very serious way, but at the same time, I need that right balance.

“My brother has a community affairs background, the balance that I need. He understands law enforcement.

“He was a 20-year retired veteran from the police department, and I need someone that I trust around me during these times for my security, and I trust my brother deeply.” – NYC Mayor Eric Adams, today on CNN.

NYC Mayor Adams went on the defensive Sunday over prominent appointments for his own brother and a former high-ranking cop implicated in a bribery scandal.

“Let me be clear on this: My brother is qualified for the position,” Adams told CNN.https://t.co/mH2vnJab1E

NYC Mayor Eric Adams confirms reports that he has appointed his brother, a retired police officer, as deputy NYPD commissioner.

“My brother is qualified … In a time when we see an increase in white supremacy and hate crimes, I have to take my security in a very serious way.” pic.twitter.com/0WKjrNTx37

“I believe that Phil acknowledges there were some real mistakes and errors that were made. He was not accused of a crime,” NYC Mayor Eric Adams defends appointing Philip Banks, fmr. NYPD, as deputy mayor, despite Banks being a target of a 2014 federal corruption probe. #CNNSOTU pic.twitter.com/4hRkWi0wEr