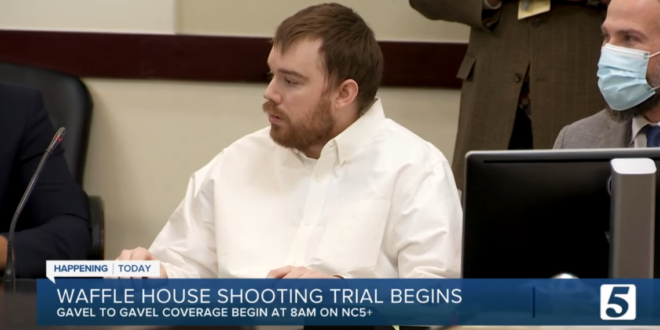 2018 Waffle House Mass Shooter: God Made Me Do It

Attorneys for a man who killed four people in a shooting at a Nashville Waffle House said Monday that Travis Reinking believed the restaurant patrons and employees were government agents whom he had been commanded by God to kill.

Reinking, 32, was naked save for a green jacket when he opened fire inside the restaurant on April 22, 2018. He fled, triggering a two-day manhunt, after a restaurant patron wrestled his assault-style rifle away from him.

In opening arguments, defense attorney Luke Evans said Reinking was suffering from severe schizophrenia that had grown worse over a period of years. On Monday, Reinking pleaded not guilty by reason of insanity.

Waffle House Shooting: The defense said #TravisReinking is mentally ill and believed he was in a relationship with singer #TaylorSwift. @LawCrimeNetwork pic.twitter.com/jM23pj7sxl

Waffle House shooting trial: Travis Reinking pleaded not guilty by reason of insanity to all charges on Monday before a Nashville jury.

Previous Graham: Root For Christians To Win The Super Bowl
Next Rachel Maddow To Announce Hiatus From Show