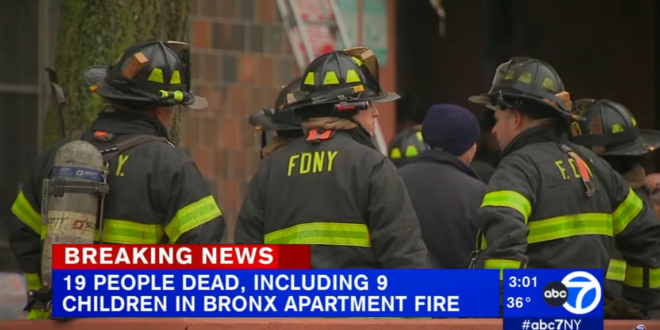 “This is a horrific, horrific, painful moment for the city of New York and the impact of this fire is going to really bring a level of just pain and despair in our city,” Mayor Adams said at the scene. “The numbers are horrific. We have over 32 people who are life-threatening at this time.”

The five-alarm blaze broke out about 10:54 a.m. in a duplex apartment spanning the second and third floors of the 19-story building at 333 E. 181st St. near Tiebout Ave. in Fordham Heights.

.@NYCMayor is briefed by @FDNY Commissioner Daniel Nigro at the scene of the 5-alarm fire at 333 East 181 Street in the Bronx. pic.twitter.com/wFHI6Srpoh

DOB inspectors are currently on scene at 333 East 181 Street, Bronx, with @FDNY, @nycemergencymgt & @NYPDnews to conduct structural stability inspections throughout the building and assist with the ongoing investigation into the 5-alarm fire. https://t.co/fMNAM9mjBx