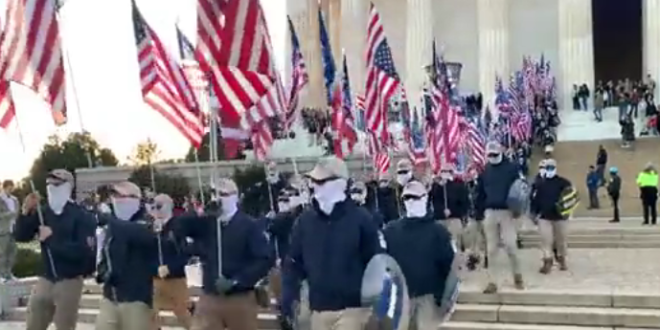 More than a hundred members of a white supremacist group marched in downtown Washington, DC on Saturday evening while chanting “reclaim America,” reports say. Videos show members of Patriot Front outside the Lincoln Memorial wearing matching outfits of khaki pants, dark blue jackets, and baseball caps. Some carried flags, shields, and photographs show one banner reading “victory or death.” Their faces were obscured mainly by sunglasses and white coverings around their noses and mouths.

As Patriot Front’s leader Thomas Rousseau spoke beside the Capitol reflecting pool, bystanders booed. Asked about the reason for the march, Rousseau said, “Our demonstrations are an exhibition of our unified capability to organize, to show our strength—not as brawlers or public nuisances, but as men capable of illustrating a message and seeking an America that more closely resembles the interests of its true people.”

A beautiful night at the Lincoln Memorial interrupted by demonstrators chanting “reclaim America.“ The crowd gave them the finger and exchanged profanities. pic.twitter.com/Z2voculi9Z

Cops in vehicles and on bikes appear to be escorting the fascist, white supremacist Patriot Front as they march towards the capitol. pic.twitter.com/zXsLK3unRt

— Read Pedagogy of the Oppressed by Paulo Freire (@JoshuaPotash) December 4, 2021

The fascist, white supremacist group “Patriot Front” is now at the capitol. pic.twitter.com/zjb1PxZ5pJ

— Read Pedagogy of the Oppressed by Paulo Freire (@JoshuaPotash) December 4, 2021

Leader of Patriot Front gives his reason for the march. pic.twitter.com/aXiQiOcEoc

HAPPENING NOW: About 500 men with riot shields are marching in #WashingtonDC pic.twitter.com/I2GS1vPZGJ

This is Thomas Rousseu of Patriot Front in Charlottesville, these were the shields they didn’t wear masks and were known as Vanguard America. they changed their name and wear masks because they all got doxxed in C’Ville. Today a LOT of them marched into DC today pic.twitter.com/wQBO9JRRDu

Reality: Patriot Front is a fascist group (in the literal sense of that word) that formed in 2017 and does stuff like what they did in DC periodically https://t.co/4Q5UMLBL6L

This looks fake to me. Why are their faces covered? Is it because they are FBI agents posing as right-wing extremists? Where are the media interviews so we can see and hear directly from this group? https://t.co/s8T4N421sC

Everything that would reflect poorly for me is a false flag. Oh, you saw an embarrassing photo of me? That was the CIA. I spilled spaghetti on my shirt? FBI setup. I tripped on the curb and ripped my pants open exposing a pair a pair of pooped underwear? No doubt DHS involved. pic.twitter.com/C6ghiglQfY