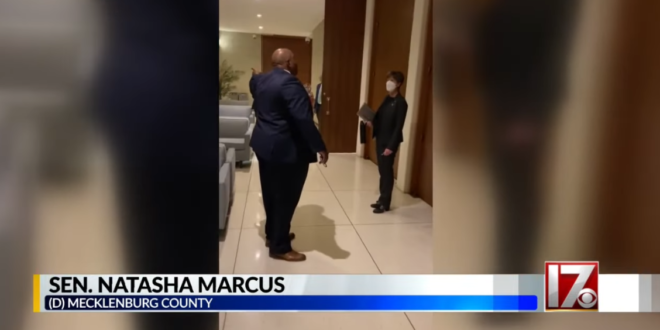 North Carolina Lt. Gov. Mark Robinson, a Republican who has used his pulpit to make numerous anti-LGBTQ comments, confronted a Democratic lawmaker Monday night after she gave a speech responding to Robinson’s remarks. Robinson “berated” state Sen. Julie Mayfield, a Democrat from Asheville, after her speech and wagged his finger in front of her face, saying he didn’t appreciate her “equating Black people with gay people,” according to Mayfield and another lawmaker who witnessed the encounter.

Robinson’s comments were in response to a speech Mayfield gave Monday. In that speech, Mayfield highlighted deadly violence against Black people and discrimination against LGBTQ people. “He said ‘You know where I am and where to find me,’” Sen. Natasha Marcus said, paraphrasing. “’If you have something to say to me you should come and say it to my face.’” Marcus then began recording the interaction.

“If I had thought there was a glimmer of hope that he had an open mind on this, that he was open to a conversation about his views on the LGBTQ community, I would have gone to him first, which I think is what he was criticizing me for,” Mayfield said.

As the lieutenant governor, Robinson is the president of the North Carolina State Senate. “As elected leaders we have the responsibility to serve all of our constituents, not just those who look like us,” Mayfield said during the speech.

Mayfield added that government officials don’t just represent those who voted for them. The video of Robinson and Mayfield has since gone viral across the state.

As I’ve reported multiple times, Robinson is not only viciously anti-LGBT, he’s a raging Christian nationalist who says quite plainly that non-Christians should have no role in government.

In October, he and Rep. Madison Cawthorn attended an event held by the American Renewal Project, which advocates to end the separation of church and state.

My colleague @MayfieldforNC made statements in support of #LGBTQ Equality during session tonight. The Lt Gov was so mad that he berated Sen Mayfield outside the chamber. I caught the tail end of his rant on video. pic.twitter.com/8EuCPYkhwz

For the record, Sen Mayfield’s floor remarks were full of compassion for all people. She believes, as I do, that elected reps should not speak in hateful terms about our constituents. The struggle for civil rights is ongoing. Here is what she said that enraged the bully Lt Gov: pic.twitter.com/IGeXWBcTbS