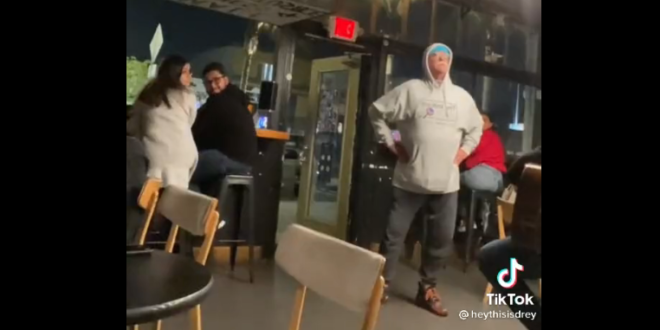 A viral video on TikTok showed the moment a man in California noticed a Black Lives Matter sign at a bar and started harassing customers inside. The video starts with a white man standing by the large open window and yelling at someone inside.

“Fuck your racist bullshit,” he yelled as he slammed his hands on the bar next to the window. The man then entered the bar and threw his hands up as he repeatedly yelled, “I’m white!” and to “kill me I’m white.”

The video then jumped to footage of police lights. CVPD told Newsweek that the individual was arrested for vandalism involving the door and that he received a citation at the scene.

Read the full article. As you can see below, activists say they’ve found evidence that the same man can be seen at the US Capitol during the January 6th riot. Watch the clips.

Howard Freelove, a local white nationalist in the San Diego area, harassed people enjoying music at Brew Bar in Chula Vista the other day, and broke their door because the business displays a Black Lives Matter sign. pic.twitter.com/QhbpiZN0QT

We found him, thank you pic.twitter.com/tJt0ywuf8f

I’d love to help clear that up for you. Here’s Howard Freelove at the Ellipse Rally on Jan6. https://t.co/xY2hccB1uz pic.twitter.com/4R80IQFYNn

Previous Court Halts NC Election Filings Over Gerrymandering
Next STUDY: Viagra May Be Effective Against Alzheimer’s