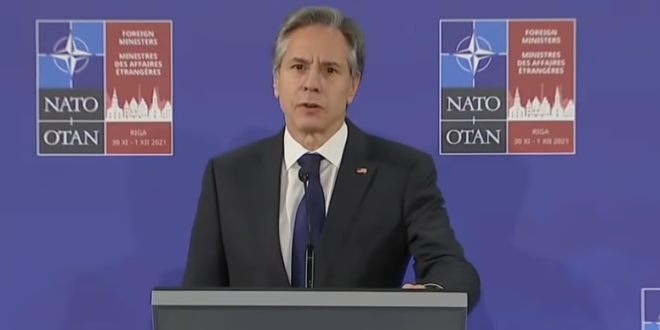 U.S. Secretary of State Antony Blinken warned Moscow of the “severe costs” Russia would pay if it invaded Ukraine, urging his Russian counterpart on Thursday to seek a diplomatic exit from the crisis.

Blinken delivered the warning to Russian Foreign Minister Sergei Lavrov at what he called a “candid” meeting in Stockholm and said it was likely that Presidents Joe Biden and Vladimir Putin would speak soon.

“I made very clear our deep concerns and our resolve to hold Russia responsible for its actions, including our commitment to work with European allies to impose severe costs and consequences on Russia if it takes further aggressive action against Ukraine,” Blinken told a news conference after the meeting.

The meeting between Blinken and Lavrov on the sidelines of the Organization for Security and Cooperation in Europe summit in Stockholm did not yield a concrete path forward, but both sides agreed to continue diplomatic conversations.

Blinken again “made clear that the United States and our allies are prepared to impose significant costs” if Moscow pursues military escalation, US State Department spokesperson Ned Price said in a written readout of the meeting.

In his remarks to the press Thursday, Lavrov stressed that although Russia does “not want any conflicts” with NATO over Ukraine, it maintains the “right to choose ways to ensure its legitimate security interests.”