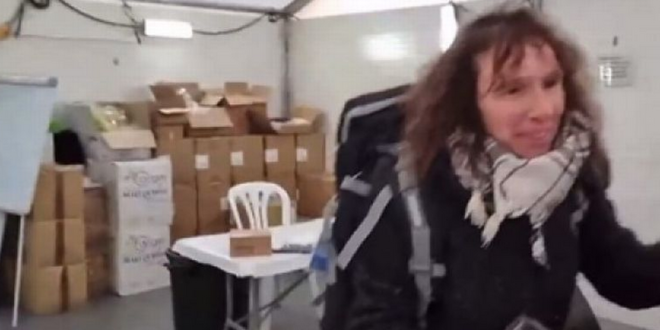 Police have issued a CCTV image of a woman they wish to speak to following an anti-vaccine protest in Milton Keynes. A number of protesters descended onto the Central MK coronavirus testing site yesterday (December 29) with an individual spotted taking equipment from the facility.

An investigation into the incident is on-going, but no one has been arrested at this time. Police have now released an image of a woman they wish to speak to. Chief Inspector Graham Hadley, of Thames Valley Police, said: “We are carrying out a thorough investigation into the protest that happened yesterday.”

Police are appealing for information after anti-vaccine protesters targeted an NHS testing centre, shouted abuse at staff and appeared to damage equipment. Dozens entered the site in Milton Keynes on Wednesday, and were captured in videos shared on social media.

Videos of the event showed the marchers throwing traffic cones towards the marquee set up to administer tests, and knocking down signs for the testing centre. They could be heard accusing staff of “genocide” and some were chanting “shame on you”.

One protester appeared to take test kits and equipment away with her. Piers Corbyn, a prominent anti-vaccine campaigner, can be seen holding a microphone and walking with protesters through the test centre site.

The first tweet below is from the UK’s health minister.

I was appalled to see Piers Corbyn and his mob threaten NHS test and trace staff who are working so hard to keep people safe.

This kind of vile behaviour is unacceptable.

Thames Valley Police release image of woman that officers would like to speak to in connection with a Milton Keynes theft investigation.

During anti-vaccination protests at a testing site in central MK, an individual was seen to take equipment.https://t.co/cttOjoqJzW pic.twitter.com/hamCWyHNof

Do you recognise this woman?

Officers would like to speak to her following a theft.

Anti-vax group led by Piers Corbyn in Milton Keynes today.
This woman is nicking equipments I paid for with my taxes, she deserves to clean NHS hospitals every day for the next 10 years!!! @pritipatel @sajidjavid @tvp_mkpic.twitter.com/eLOK2bvrvY

Please arrest this woman, they can not be permitted to behave like this, I believe itis a vaccination centre in Milton Keynes. Thank you. pic.twitter.com/uJrCjQQi8Z