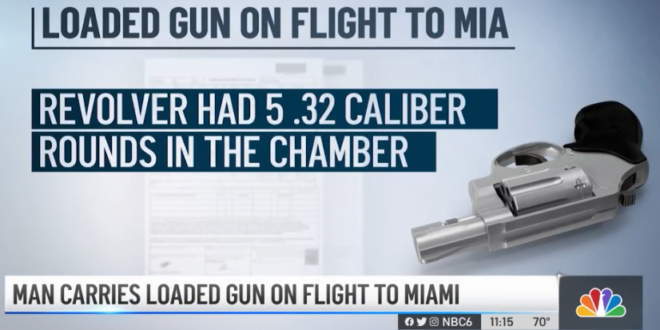 A man carrying a fully loaded gun boarded a commercial flight in Barbados and flew to Miami with the firearm in the plane’s cabin, the NBC 6 Investigators exclusively learned — a hair-raising incident that triggered an immediate investigation by the TSA into the security lapse that aviation experts say could have caused a disaster.

In security video footage exclusively obtained by NBC 6 Investigators, airline passenger Cameron Hinds is seen being stopped at a Miami International Airport checkpoint after TSA officers found a loaded handgun in his belongings.

According to a Miami-Dade Police report, Hinds’ revolver had five 32-caliber rounds in the gun’s chamber. He told told police that when he boarded the plane in Barbados he had the revolver in his pants pocket. That failure in screening abroad has put federal security experts into high alert.

Read the full article. Hinds has been charged with a felony.

.@nbc6 reporting that a man boarded a plane in Barbados, with a loaded gun in his pocket, and the gun wasn’t discovered until he arrived at Miami Int’l Airport.https://t.co/lGNWuU1Mig

Previous Israeli Spyware Used To Eavesdrop On US Diplomats
Next REPORT: Omicron Spreads Twice As Fast As Delta Did