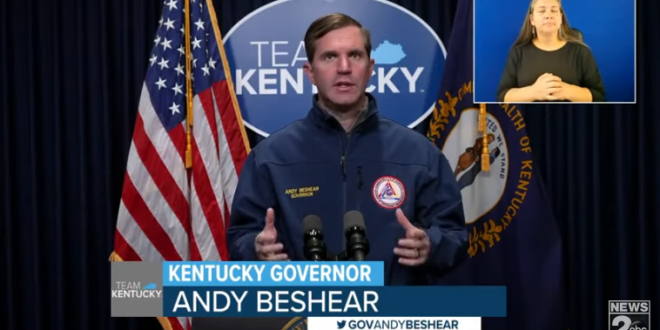 Gov. Andy Beshear told WLKY during a live interview that at least 50 people were likely killed in western Kentucky after a long and significant tornado ripped through the area overnight.

“This is going to be some of the worst tornado damage that we’ve seen in a long time,” Beshear said early Saturday. “This is likely to be the most severe tornado outbreak in our state’s history.”

“We believe our death toll from this event will exceed 50 Kentuckians and probably end up 70 to 100,” said Beshear. The tornado that ravaged multiple Kentucky counties also killed people in Arkansas.

Tornadoes and severe weather caused catastrophic damage in multiple states, tearing through a candle factory in Kentucky, an Amazon facility in Illinois, a nursing home in Arkansas and homes and buildings. Dozens of deaths are feared. https://t.co/VuRjAQBFNf

The storm of this latest severe weather event tracked more than 250 miles through several states (including Arkansas, Missouri, Tennessee, and Kentucky). One or more deadly tornadoes were spawned, with major structural damage noted.#arwx pic.twitter.com/tUA2XlWADz