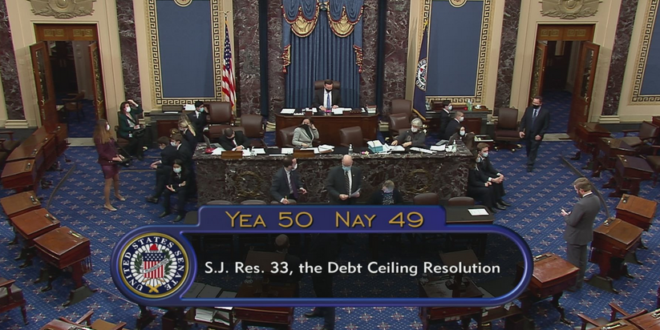 Congressional Democrats moved toward raising the debt ceiling Tuesday, one day before the Dec. 15 deadline that Treasury Secretary Janet Yellen warned could mark the start of the first-ever U.S. default. The effort began in the Senate, which passed a debt limit hike late Tuesday afternoon in a 50-49 party-line vote.

The bill will go to the House, where the narrow Democratic majority is expected to approve it and send it to President Joe Biden’s desk late Tuesday or early Wednesday. He is set to sign it just hours before the Treasury Department forecasts it would exhaust its tools to pay the government’s bills.

50-49: Senate along party lines votes to increase the debt limit by $2.5T until 2023 to avert a default. Senator Lummis (R-WY), who is sick and is recovering in Wyoming, did not vote. Bill now heads to the House. pic.twitter.com/n2Fu2kaMot