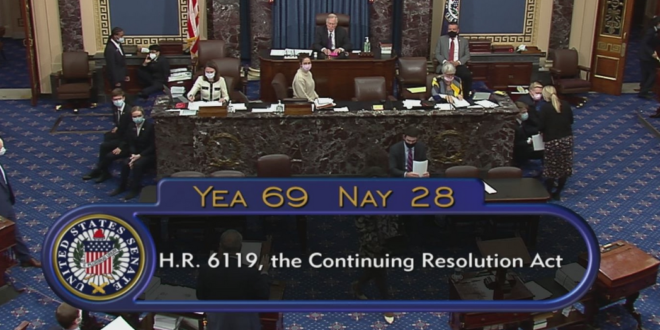 The Senate has passed a stopgap spending bill that avoids a short-term shutdown and funds the federal government through Feb. 18 after leaders defused a partisan standoff over federal vaccine mandates. The measure now goes to President Joe Biden to be signed into law.

“I am glad that in the end, cooler heads prevailed. The government will stay open and I thank the members of this chamber for walking us back from the brink of an avoidable, needless and costly shutdown,” said Senate Majority Leader Chuck Schumer, D-N.Y.

‘With this agreement, there will be no government shutdown,’ Senate Majority Leader Chuck Schumer said as the U.S. Senate passed a bill to fund the government through mid-February https://t.co/yRC4ICLWhR pic.twitter.com/o4ylJJx56z

Goes now to the President.