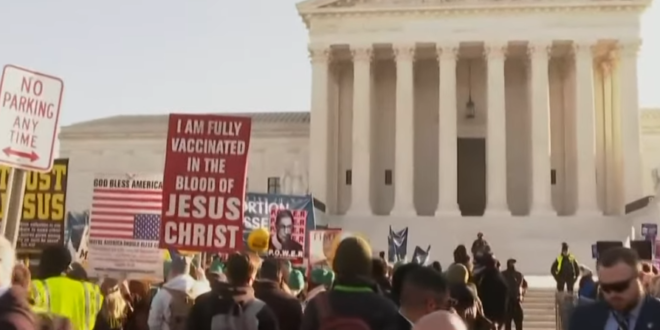 The Supreme Court seemed poised on Wednesday to uphold a Mississippi law that bans abortions after 15 weeks of pregnancy, based on sometimes tense and heated questioning at a momentous argument in the most important abortion case in decades.

Such a ruling would be flatly at odds with what the court has said was the central holding of Roe v. Wade, the 1973 decision that established a constitutional right to abortion and prohibited states from banning the procedure before fetal viability, or around 23 weeks.

But the court’s six-member conservative majority seemed divided about whether to stop at 15 weeks, for now at least, or whether to overrule Roe entirely, allowing states to ban abortions at any time or entirely.

“Will this institution survive the stench that this creates in the public perception that the Constitution and its reading are just political acts?” asked Sonia Sotomayor, one of three liberal justices on the nine-member bench, at the start of oral arguments in a case challenging Roe v. Wade and Planned Parenthood v. Casey.

“I don’t see how it is possible,” Sotomayor said. Roe, Casey and other “watershed decisions” — such as Brown v. Board of Education, which ruled segregation unconstitutional — have created an “entrenched set of expectations in our society,” Sotomayor said.

“If people actually believe it’s all political, how will we survive? How will the court survive?” she asked. Mississippi Solicitor General Scott Stewart responded that to avoid the appearance of a politicized court, the justices should reach a decision squarely grounded in the text of the Constitution.

Supreme Court seems poised to uphold a Mississippi law that bans abortions after 15 weeks of pregnancy, based on sometimes tense and heated questioning at a momentous argument in the most important abortion case in decades. @adamliptak https://t.co/m3iwJvojku