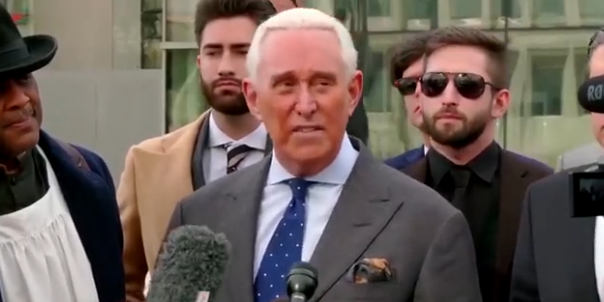 Stone emerged from the deposition after only an hour-and-a-half and told reporters he invoked the Fifth Amendment, which offers protection against self-incrimination, “not because I have done anything wrong, but because I am fully aware of the House Democrats’ long history of fabricating perjury charges.”

“I question the legitimacy of this inquiry,” Stone said, “based on the fact that Speaker Pelosi rejected the appointment of Republicans to this committee and seated two anti-Trump Republicans. This is witch hunt 3.0.” The long-time Republican operative used the hours before his deposition to raise money for his legal defense.

Trump ally Roger Stone met briefly with the committee investigating the Capitol riot and said afterward that he pleaded the Fifth to all questions https://t.co/6n5GaJY1rY

Trump in 2016: If you’re innocent, why are you taking the Fifth Amendment? pic.twitter.com/65L30WaT64

Accompanied for some reason by PA Senate candidate Bobby Jeffries, Roger Stone heads into the J6 deposition to take the 5th. pic.twitter.com/KDRARkCXA2

Longtime Donald Trump adviser Roger Stone appeared before a congressional committee investigating the January 6 attack on the Capitol but said he refused to answer questions pic.twitter.com/VvPGBndzvt