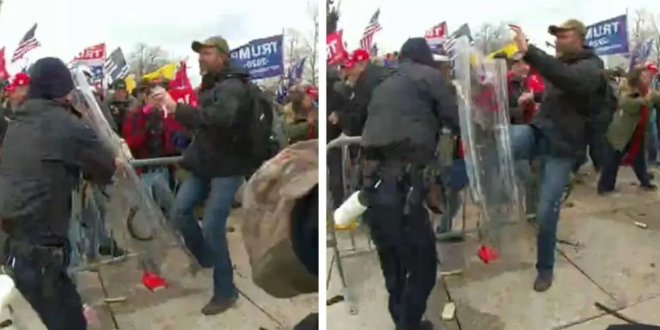 A Georgia man accused of striking and kicking police officers while armed with mace and a boot knife outside the U.S. Capitol on Jan. 6 has pleaded guilty to assault. Kevin Creek, appearing by video, pleaded guilty before U.S. District Judge Dabney Friedrich on Tuesday.

Creek assaulted multiple law enforcement officers while on the West Terrace of the Capitol building, according to prosecutors. Creek is seen on body-worn camera footage kicking an officer with his right foot as the officer holds up a shield to protect himself.

He is also seen striking an officer with his right hand. Under the federal assault statute to which Creek is pleading guilty, he could face a maximum eight years in prison and up to a $250,000 fine.

Creek, accompanied by his lawyer, reportedly told an FBI special agent that he “did not remember assaulting any officer.”

Kevin Creek of Georgia, who was caught on camera striking and kicking officers, was arrested Wednesday. https://t.co/RJ01ZsGwWB

Kevin Creek was known to #seditionhunters as #MadMongrel, and was 296-AFO on the FBI’s Capitol list. pic.twitter.com/rOWeoSTX1k