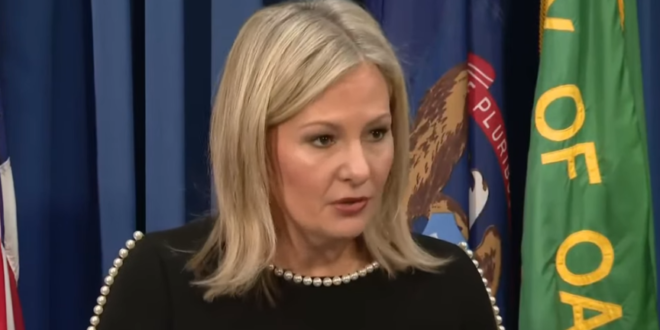 Prosecutor: Mother Of MI Shooter Texted “LOL I’m Not Mad At You” After He Was Caught Googling For Ammo

After the Michigan shooting suspect, Ethan Crumbley, posted about his gun on social media, his mother, Jennifer Crumbley also created a social media post, saying her son was “testing out his new Christmas present,” Oakland County Prosecutor Karen McDonald said Friday as she announced the charges that her office is bringing against his parents. When a teacher reported that Ethan Crumbley was found searching for ammunition on his phone during class on Nov. 21, his mother was contacted by school officials.

“Jennifer Crumbley was contacted via voicemail by school personnel regarding the son’s inappropriate internet search. School personnel indicate they followed that voicemail up with an e-mail but received no response from either parent,” McDonald said. “Thereafter, Jennifer Crumbley exchanged text messages about the incident with her son on that day, stating, ‘LOL, I’m not mad at you, you have to learn not to get caught.'”

After calls from school officials worried about him buying ammunition, the mom of the Michigan school shooter texted him “lol, I’m not mad…you have to learn not to get caught.”
It wasn’t until *after* news broke of a gunman in the school that she texted “Ethan, don’t do it.”

She signed it, “A hard working Middle Class Law Abiding Citizen who is sick of getting fucked in the ass and would rather be grabbed by the pussy.” pic.twitter.com/KBoqMLxvNh