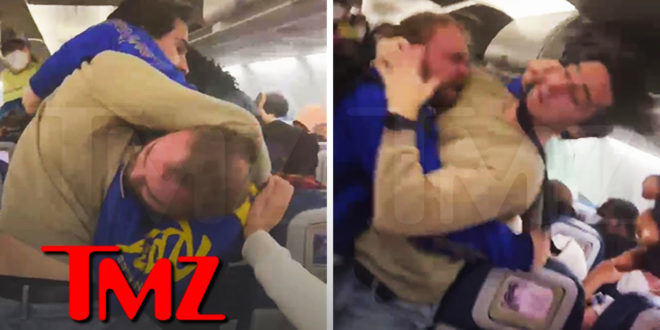 Tis the season to deck fellow travelers in the aisle of your holiday flight.

A ‘loud, drunken’ passenger who was reportedly violating mask mandates on a red-eye Delta flight from Los Angeles to Memphis engaged in little impromptu MMA with a fellow traveler, a newly released video on TMZ shows.

The man in blue, who apparently had a little too much Christmas cheer, was not wearing his mask properly, annoying other passengers.

The guy he was fighting had apparently said something like, “You must be from L.A. because you think you’re better than everyone else” … whatever that means.

One of them said to the other, “You’re a really horrible person,” and that apparently triggered the fight.

They really went at it … causing chaos in the cabin. Strangely, police were nowhere in sight when the flight landed. The 2 men both went to baggage claim but kept their distance.