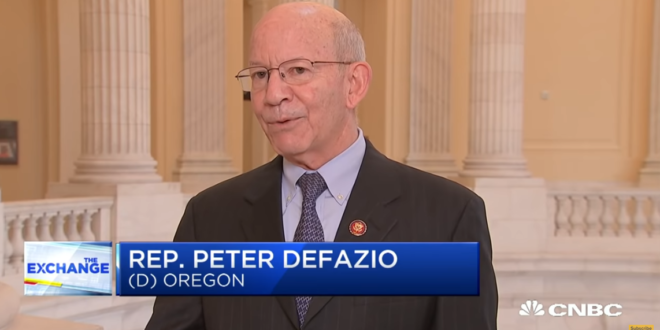 House Transportation and Infrastructure Chairman Peter A. DeFazio, a veteran lawmaker with 36 years of congressional experience under his belt, announced Wednesday that he will not seek reelection in 2022. “It’s time for me to pass the baton to the next generation so I can focus on my health and well-being,” the Oregon Democrat said.

DeFazio has represented Oregon’s 4th District, which covers the southern half of the state’s Pacific coastline, since 1987.

He had his toughest reelection race last fall against Republican Alek Skarlatos, an Afghanistan veteran best known for thwarting a gunman on a Paris-bound train from Amsterdam in 2015. Skarlatos later performed on “Dancing with the Stars” and played himself in a Clint Eastwood-directed movie about the train attack.

Read the full article. DeFazio won by 6 points in 2020. He is the 19th House Democrat to so far announce retirement or a bid for another office.

Within an hour of DeFazio’s announcement, D.C. Del. Eleanor Holmes Norton said she would run to succeed him as top Democrat on the Transportation panel during the next Congress. https://t.co/rqpczGpRI4