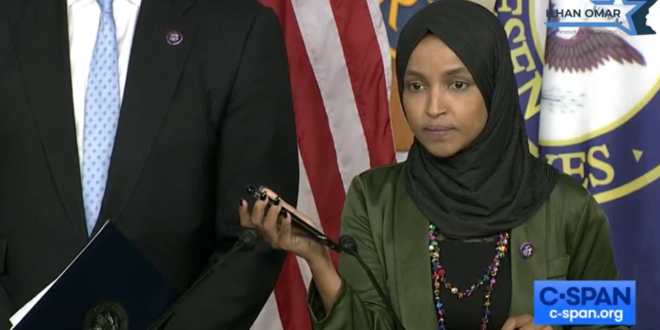 Democratic Minnesota Rep. Ilhan Omar on Tuesday played a harrowing death threat recently left for her by voicemail, while imploring House Republican leaders to do more to tamp down “anti-Muslim hatred” in their ranks and “hold those who perpetuate it accountable.”

“When a sitting member of Congress calls a colleague a member of the ‘jihad squad’ and falsifies a story to suggest I will blow up the Capitol, it is not just an attack on me but on millions of American Muslims across the country,” Omar said during a news conference Tuesday.

Then Omar played the voicemail, laden with profanity, racial epithets and a threat to “take you off the face of the (expletive) earth,” which she said was among hundreds of such messages she has reported since joining Congress. Omar said the voicemail was left for her after Boebert released another video on Monday attacking her.

The House of Representatives must decide whether such naked bigotry is acceptable.pic.twitter.com/89eXBte2If

Lauren Boebert can clearly see what her Islamophobic comments are doing.

One of Lauren Boebert’s followers on Telegram called Ilhan Omar a “Jihadist Anti-American B*tch” and a “MF daughter of a suicide belt.” pic.twitter.com/6vf9ox5ZV6

More anti-Muslim, racist slurs from another one of Lauren Boebert’s followers in response to her phone call video. pic.twitter.com/IVkTempgXL

This Lauren Boebert’s follower thinks it’s funny to joke about Ilhan having a “pressure cooker.”

This other one calls Ilhan, “anti-white,” and is upset Boebert apologized. pic.twitter.com/L6PUVRNWyz

This Proud Boy is upset Lauren Boebert offered an apology in the first place. pic.twitter.com/Rcgx0WmeOM

This Lauren Boebert follower calls for Ilhan Omar and the squad to be send to “the guillotine” in response to her phone call video. pic.twitter.com/t9pn2hRIFg

Lauren Boebert’s followers have posted racism and one called the entire squad to be executed in response to Boebert’s video on Telegram.

Many of Boebert followers wish she would have never apologized.

Lauren Boebert is inspiring these reactions and that puts others in danger. pic.twitter.com/AZ3a464l7G