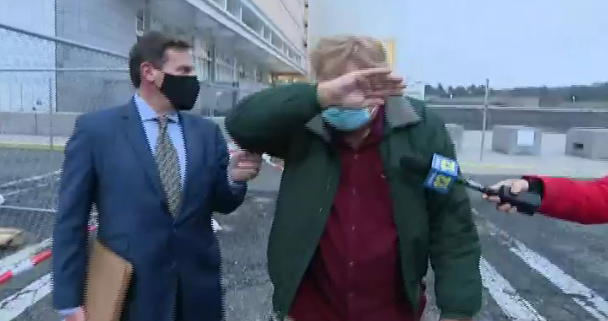 A 74-year-old Bayport man accused of mailing threatening letters to members of the LGBTQ community on Long Island and in New York City is facing new charges. After facing a federal judge Monday, 74-year-old Robert Fehring surrendered himself to Suffolk police today.

In addition to finding the stolen pride flags inside his home while executing a search warrant, police say they also found two loaded shotguns and hundreds of rounds of ammunition.

The other letters that Mr. Fehring is accused of sending, according to the complaint, include one this year threatening to shoot a high-powered rifle at a Long Island Pride event in June; another warning a local Chamber of Commerce member that ambulances would be needed if the group allowed an L.G.B.T.Q. event to proceed; and a third describing a Brooklyn barbershop as a “perfect target for a bombing.”

If convicted, Mr. Fehring, whom Newsday identified as a retired high school teacher, band director and track coach, faces up to five years in prison. Court records show that he sued the Suffolk County police unsuccessfully after being taken into custody in 2010 after an off-duty officer saw him hide a shotgun under a raincoat and bring it into a Long Island office building.

My first report on his arrest is here.

Robert Fehring sent this in May 2021 and it took the FBI 7 MONTHS to indict him after he incriminated himself after waiving his Miranda Rights. It’s a miracle there haven’t been more attacks on LGBTQ folks with investigations taking this long. pic.twitter.com/ZXyMj46Gg8

Robert Fehring warned that an attack on New York City’s Pride March would make the Pulse nightclub shooting “look like a cakewalk,” the authorities said. https://t.co/fk2bIpoUKF

Seen outside Robert Fehring’s home yesterday: funeral bunting over an American flag. Fehring was federally charged for threatening to harm and kill members of the LGBTQ community. He is now back home after making $100K bail and wearing an ankle monitoring bracelet #nbc4ny pic.twitter.com/WUmmUPZoSU