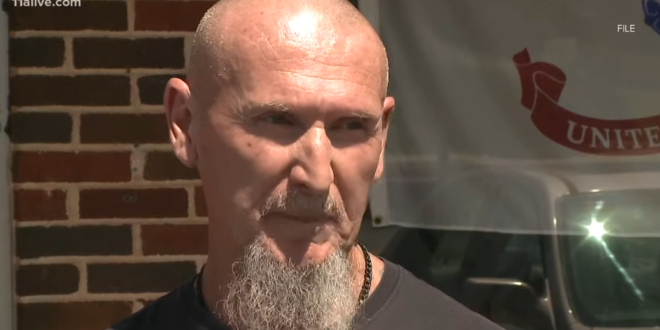 Here’s a quick reality check on the body politic: Chester Doles is running for office. Doles, a former leader of the Ku Klux Klan and the neo-Nazi National Alliance, filed paperwork earlier this year to run for a spot on the Lumpkin County Board of Commissioners in 2022. He ramped up his campaign this fall, riding a souped-up Jeep in Dahlonega’s annual Gold Rush parade.

He’s been to prison twice, marched with white nationalists in Charlottesville in 2017′s deadly “Unite the Right” rally, and, while he claims to have left white supremacist groups behind, stays in contact with skinheads, neo-Confederates and Klansmen. Even so, he believes he can win running as a Republican and an ardent supporter of Trump. His campaign signs carry the warning “Stop Socialism. Save America,” a slogan borrowed from Marjorie Taylor Greene.

Read the full article. Doles first appeared on JMG when he was photographed being chummy with then-Sen. Kelly Loeffler, who lied about knowing him.

Didn’t we ask the same thing about Donald Trump?https://t.co/jxGOP43vLF

In 2017, he marched in Charlottesville.

This is who @KLoeffler is proudly appealing to. pic.twitter.com/4YZcvL05rf

#MTGIsANAZIInDisguise
“Our friend Marjorie Greene is running for Congress. She’s part of the Q movement,” Doles posted in March. “Good friend to have.” Chester Doles is a former Ku Klux Klan leader with a brutally racist history.https://t.co/2N3J1q3LWO pic.twitter.com/aNtJXywzsK